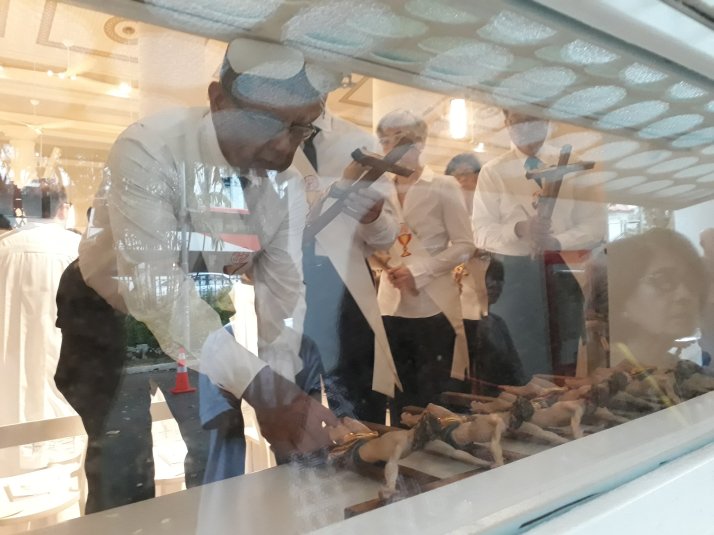 Church elders putting down icons of Jesus on the cross in the Cathedral of the Good Shepherd as worshippers look on from outside the crowded church.

A friend’s Insta-story reminded me that March 30 this year was not only Good Friday, but also the beginning of the observance period for the Chinese tomb-sweeping festival known as Qingming (清明). The coincidence of two religious festivals, each revolving around different ways of honouring the deceased, struck me deeply. And so, I was drawn to discover how each of these groups would experience the same day in their distinct ways.

END_OF_DOCUMENT_TOKEN_TO_BE_REPLACED 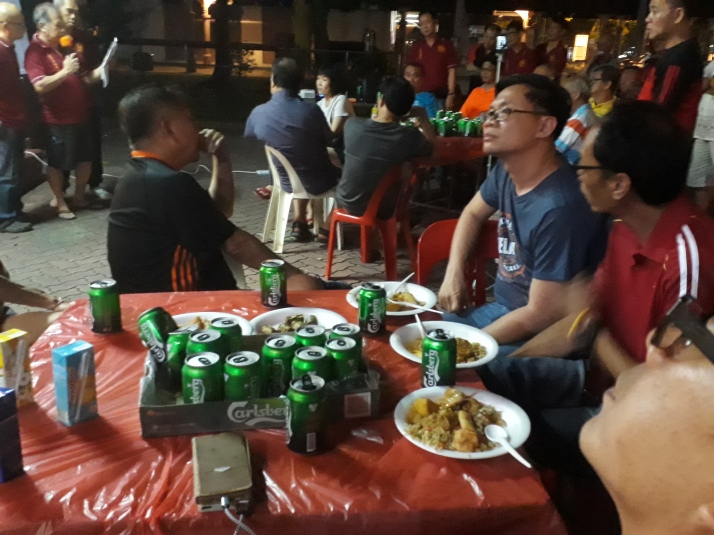 A group of the ‘older uncles’ listening to a commemorative speech by other members of Lam Fong Fut Hok amid cans of beer and plates of buffet spread.

The men and boys behind many a lion dance performance are not just performers. Years of travelling round the island as a troupe and practicing together has made them a fraternity. And the end of the old year was a good time to cement that status.

END_OF_DOCUMENT_TOKEN_TO_BE_REPLACED 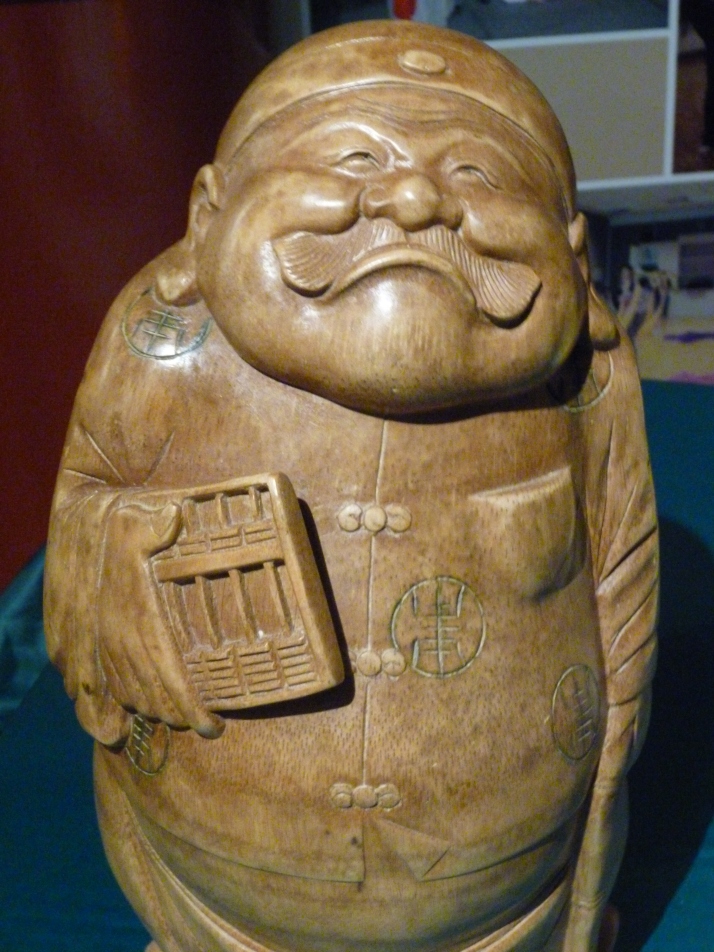 This expressive bamboo sculpture of the Chinese God of Wealth, dressed in a Qing dynasty official’s cap and magua jacket with an abacus under one arm, was one of the many wooden sculptures I found within the Singapore Chinese Opera Museum. The museum was tucked away in a tiny lot on the first floor of Sultan Plaza, and I had arrived hoping to learn more about traditional Chinese opera forms. Instead, the first thing that leapt out at me upon my arrival were the rows of wood sculptures neatly arranged on tables and shelves lining the premises. The heady smell of camphor incense wafted through the air, accompanied by the soft lilt of qin (zither) music playing over the sound system.

These sculptures were all part of the personal collection of Mr Bian Huibin, a soft-spoken man in his forties and the museum’s owner. I first saw him quietly drifting in and out of the museum, while his wife Mdm Huang Ping attended to a small steamer at a side table surrounded by bowls of rice and pickled vegetables for his lunch. “I looked for and imported these all myself,” he told me, speaking in Mandarin as he ushered me into the area, beaming with barely-concealed pride over each of his valuable pieces. “The middle row,” he said while pointing to a line of dark-coloured Guanyin sculptures in the centre of the room, “are from Indonesia, and the rest are from China. There’s one sculpture in the corner that’s about 200 years old, but the rest are fairly new.” He admitted that as a Chinese opera instructor he used the space to conduct classes on the weekends, but seemed to take an especial interest in these artefacts. When I asked them why he collected them, he told me with a simple sincerity, “I like them. I like all forms of art.”

As I surveyed each of the sculptures, Mr Bian followed me steadily, eager to share his knowledge of each of these pieces. Each of them had been carved in the likenesses of various Chinese religious or historical figures, infused by the artist with a startling liveliness in their vivid expressions or the flowing creases of their robes. All of his sculptures gained a deep, soft lustre in the glow of the museum’s fluorescent lights. He picked each of them up in turn, flipping them over to reveal the rings that signalled each sculpture’s beginning as a humble block of wood. When I asked him in halting Mandarin which of them was his favourite, he answered within a heartbeat. “It’s this statue of Zhuge Liang at the back,” was this enthusiastic response as he moved swiftly to a sculpture that had been prominently displayed on a pedestal at the back of the room. “Zhuge Liang symbolises of wisdom in China, and this carving is so lifelike. It’s also very heavy, and I enjoy feeling its weight.” He went on to elaborate on the special features of each of the different types of wood used to carve sculptures, and how the density of each sculpture was indicative of its worth. I began to have a sense that he was taking pride not just in his role as a collector, but also in his efforts to highlight Chinese culture.

It took some scrutiny to find signs of the stated focus of the museum – Chinese opera. I had to peer past the statues to see the information on the histories of different types of Chinese opera on the walls. Each dialect group in different regions of China has its own variant of opera – besides the ubiquitous Beijing Opera there are other styles such as Fujian, Teochew and Cantonese (Yue) opera that have historically been prominent in Singapore due to its large southern Chinese diaspora. I looked at the pictures of actors and actresses in flowing, richly-embroidered brocade costumes; their faces heavily made up in the standard white and deep pink that is characteristic of the genre. Chinese opera is a demanding art, involving not just singing and choreography for distinct roles, but also martial arts training for the many mythological and historical tales that are the subjects of many a traditional play. It was also a vanishing tradition, with many troupes seeing slowing demand and a lack of young actors. I thought that he would have been more openly proud of this particular tradition that he was helping to safeguard.

And yet Mr Bian was modest, if not reluctant, about mentioning his involvement in the Chinese opera scene. “You must enjoy looking at my pictures,” was his only wry comment when I came to a series of framed newspaper clippings at a corner. In bold Chinese characters, it proclaimed the couple’s status as one of the leading promoters of Chinese opera in Singapore, and mentioned the many shows they had participated in. His wife, herself still an active performer and instructor, gave no indication of the recognition she enjoyed in her hushed conversations with her husband while I was in the room. And yet under his mild-mannered exterior, Mr Bian had an eclectic of talents. He had published a photo album on the stray cats of Singapore and held his own exhibition, and a drinks menu pasted above a register referenced the opera-themed cafe he had opened along Kandahar Street.

“It’s tiring,” he put it bluntly. “I’m a musician. I also run photography classes and opera classes. It’s a rich life, yes. A rich life, but busy.” He appeared a man of simple desires, content to avoid the trappings that fame would have wrought upon him. Perhaps he delighted more in the joy he gained from his hobbies and the joy of an honest conversation than his hectic career as a Chinese opera instructor. The museum was in itself a product of his subtle but refined tastes, and reflected well who he appeared to be. Small and nondescript, but brimming with a rich and understated cultural life. 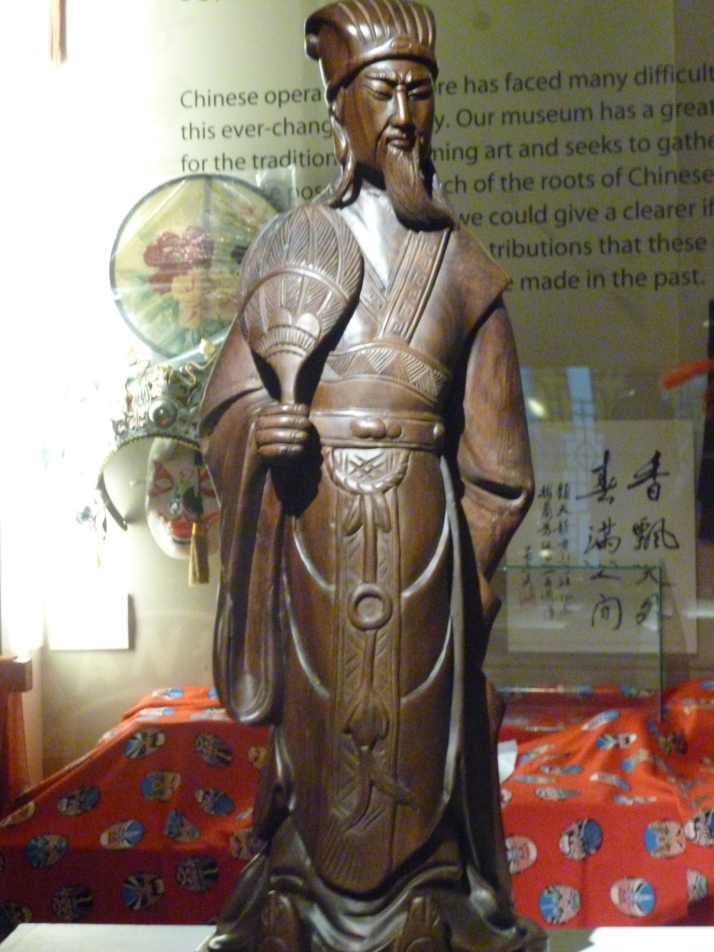 The statue of Zhuge Liang that was Mr Bian’s favourite. Zhuge Liang was a famous war strategist from the Three Kingdoms era and is often depicted with a crane-feather fan. This statue was carved from nanmu, the precious wood of the Phoebe zhennan tree that was widely coveted by Chinese royalty. 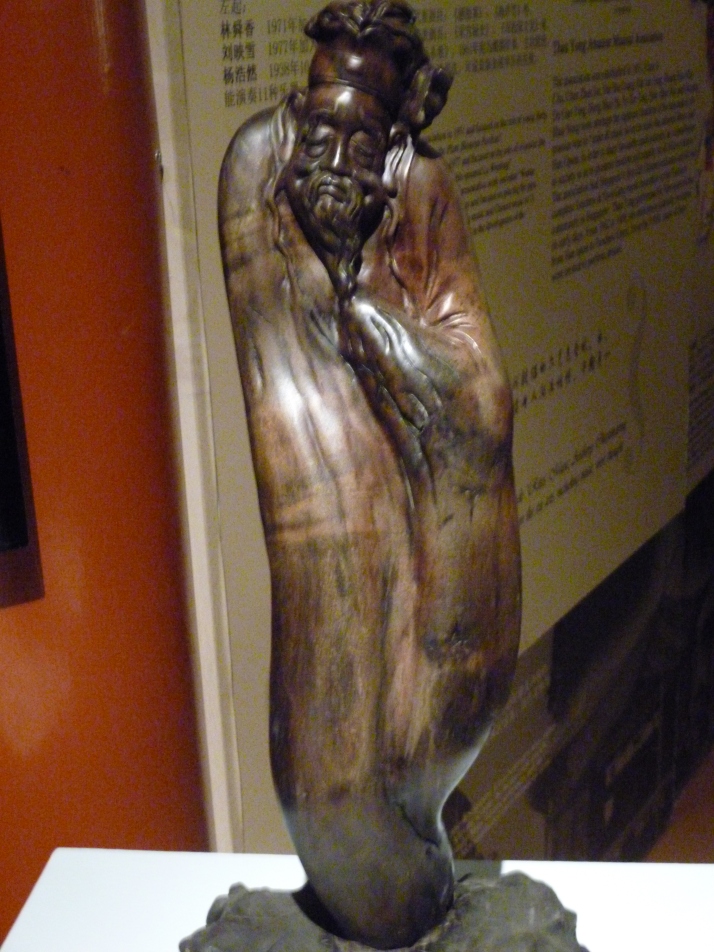 A statue of Wang Xizhi, a famous calligrapher who lived during the Jin Dynasty, that is another of Bian’s favourites. “This statue was carved from a single piece of nanmu. It’s a very expensive wood. Normally it’s used to make musical instruments, but this one was too small so it was used for a sculpture instead. It depicts him as an old man; his wanderlust and his transcendence of the material aspects of life.” 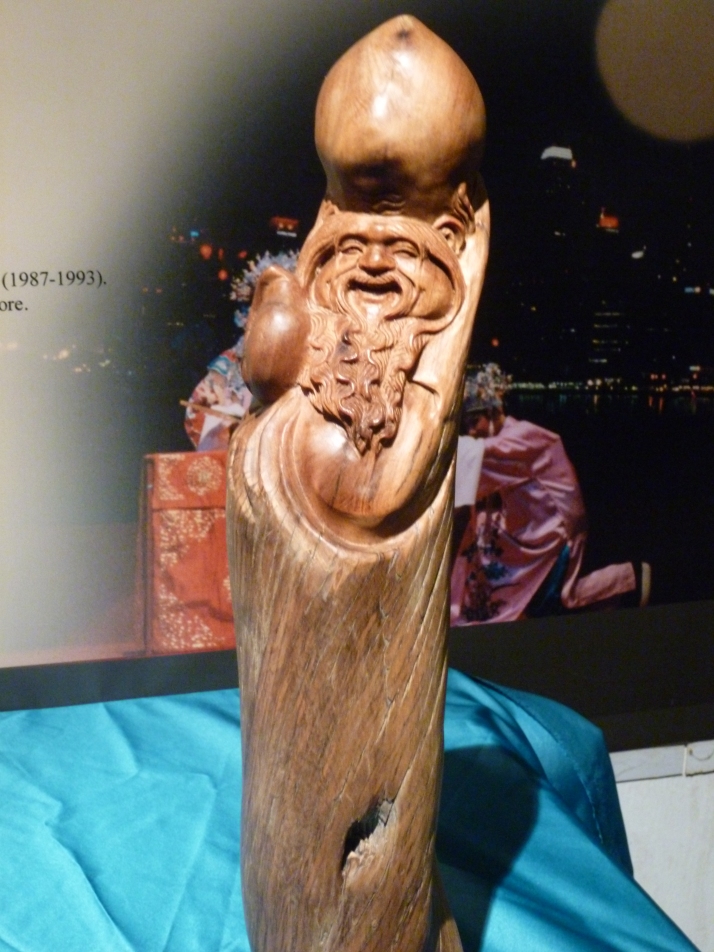 A sculpture of the God of Longevity carved from a piece of boxwood. Part of the bark was retained on the sculpture “to give the appearance of wearing robes.” The peach the sculpture is balancing on his head is a symbol of longevity in Chinese cultures, and flour peaches are often consumed on birthdays for this reason. 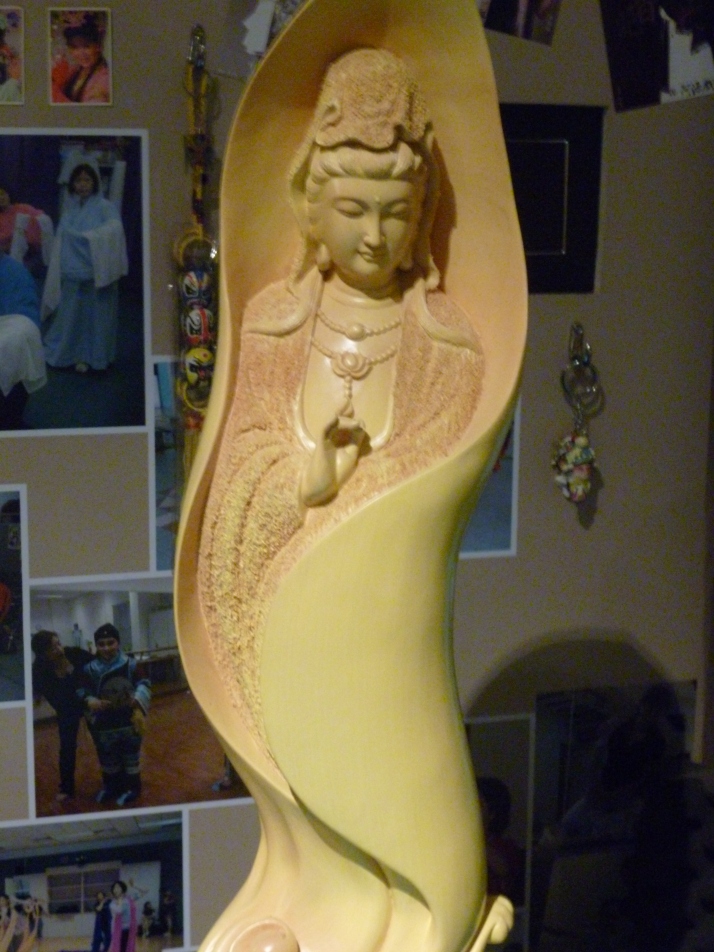 A statue of Guanyin – more commonly known as the Goddess of Mercy – carved from an un-dyed piece of yellow aromatic wood. 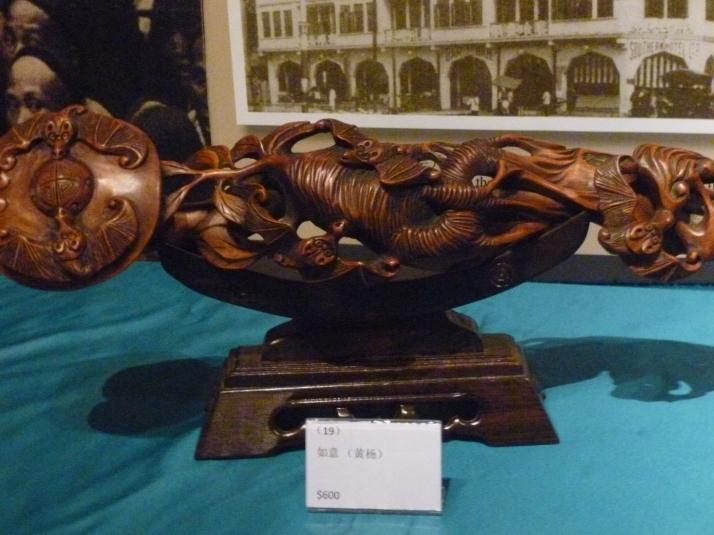 A carving of a ruyi sceptre made from boxwood. It is adorned with five smaller engravings of bats, which are associated with good fortune because of the characters for ‘bat’ and ‘prosperity’ in Chinese are read the same way. 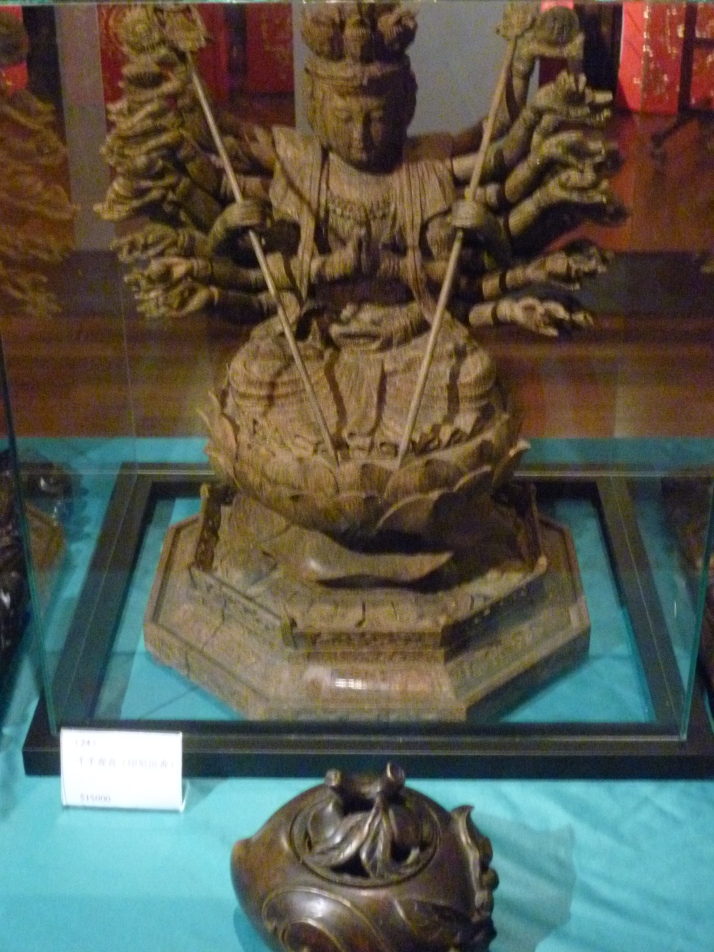 A nanmu sculpture of Guanyin before an incense burner, both carved from centuries-old wood that has attained a darker sheen. This sculpture depicts her as the Thousand Arms Guanyin, with more overt references to her status as a boddhsivatta in Buddhist canon through her attire and the lotus flower she sits on. 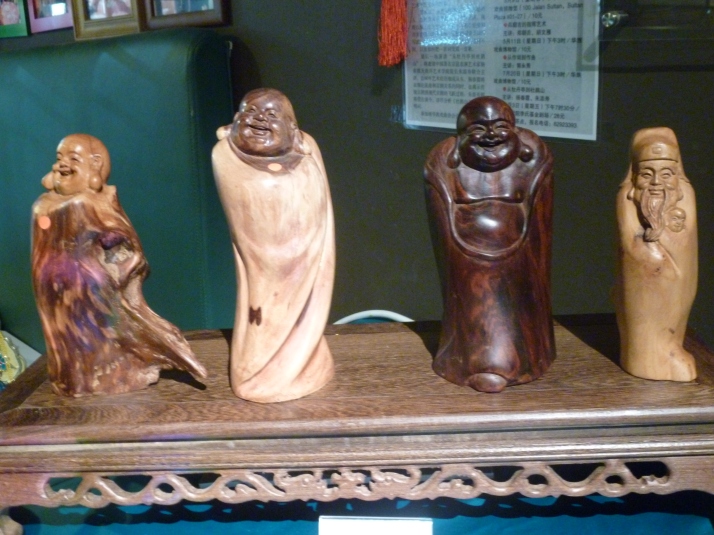 Three sculptures of the Laughing Buddha next to a statue of the God of Status. The first two sculptures from the left have part of their bark left on the statue.

A cypress statue of Guan Yu, a Three Kingdoms general and a figure frequently venerated as a god of war. “You can tell how old the wood is from its colour; the younger ones are lighter-coloured. The tree this was made from must have been eighty, ninety years old.” 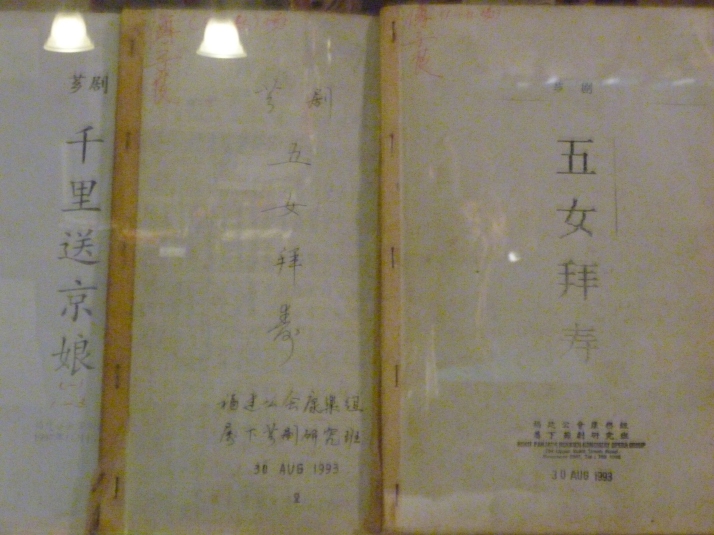 Copies of old scripts for Beijing Opera plays. The title on the left is ‘Sending the City Maiden for A Thousand Li (a unit of measurement)’ while the one on the right reads ‘Five Women Praying For Longevity’. 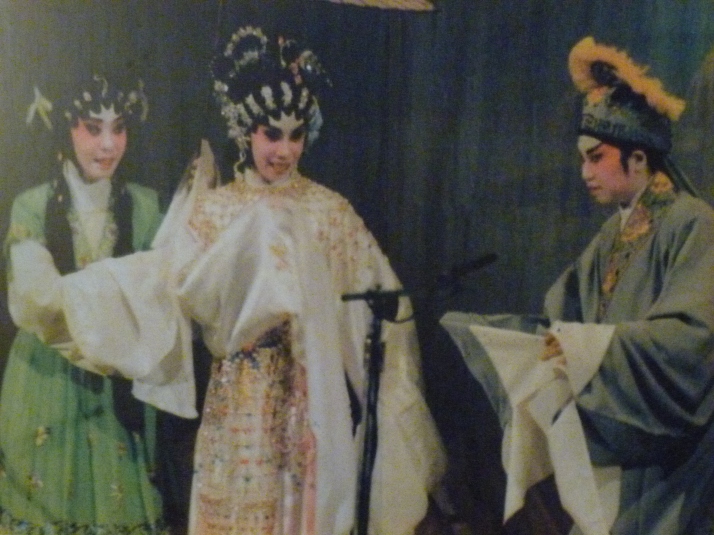 A scene from a wall depicting a Cantonese opera performance of the famous folktale, ‘Madame White Snake’. The titular character is in the middle, with her sworn sister the Green Snake Lady on the left and the mortal Xu Xian on the right. 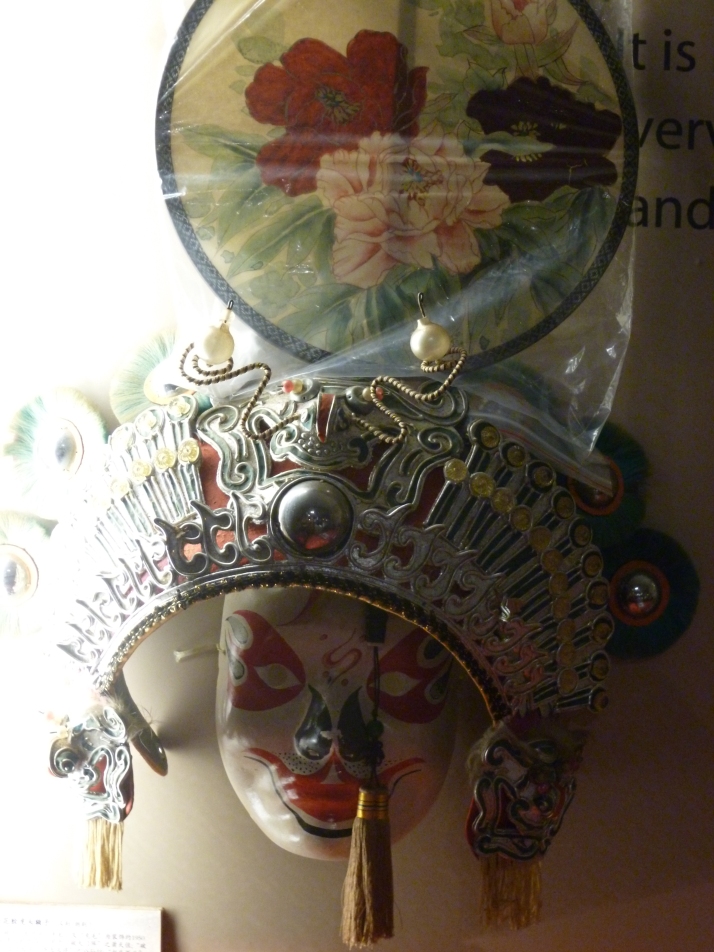 A Chinese opera headdress above a mask that was typically worn by performers. The colour of each mask was used to convey certain attributes about the character. White masks were often associated with treachery and evil, and usually worn by the villain.

A headdress and phoenix gown worn by the female (dan) roles in Chinese opera. 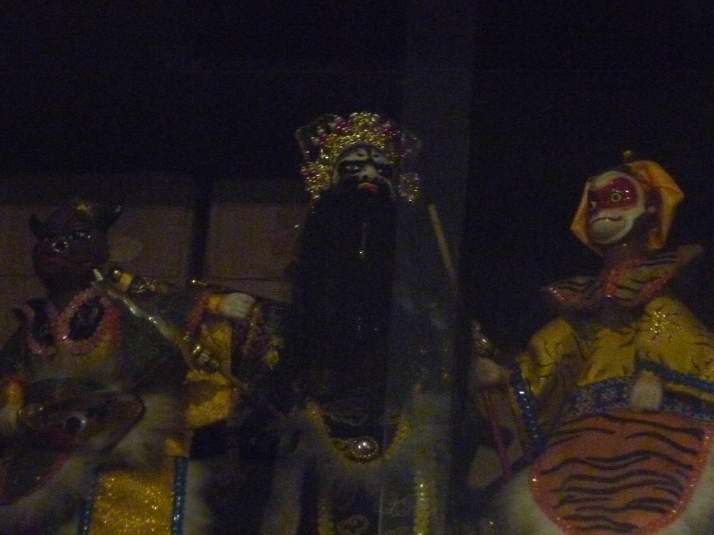 Three dolls depicting the three main characters of ‘Journey to the West’, presented as opera characters. From left to right they are Zhu Bajie, Sha Wujing, and Sun Wukong. 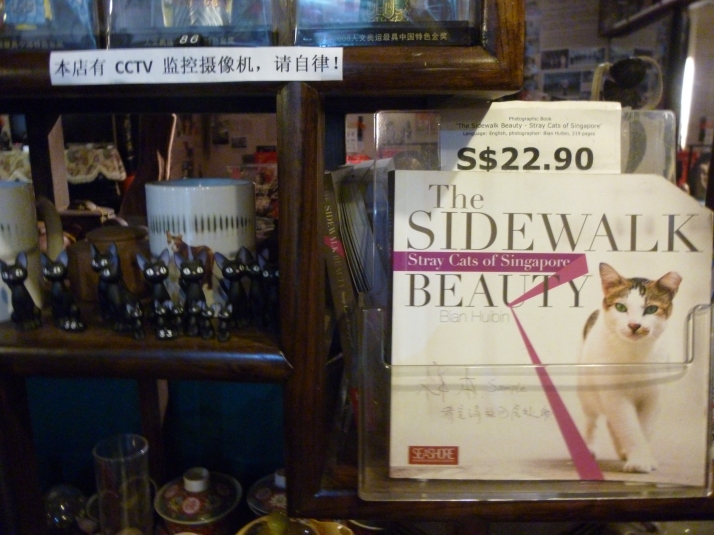 A display featuring Mr Bian’s book of photographs on the stray cats of Singapore. “I find the stray cats cute. I did it to promote tourism to Singapore. I think these cats represent the idyllic atmosphere here.” 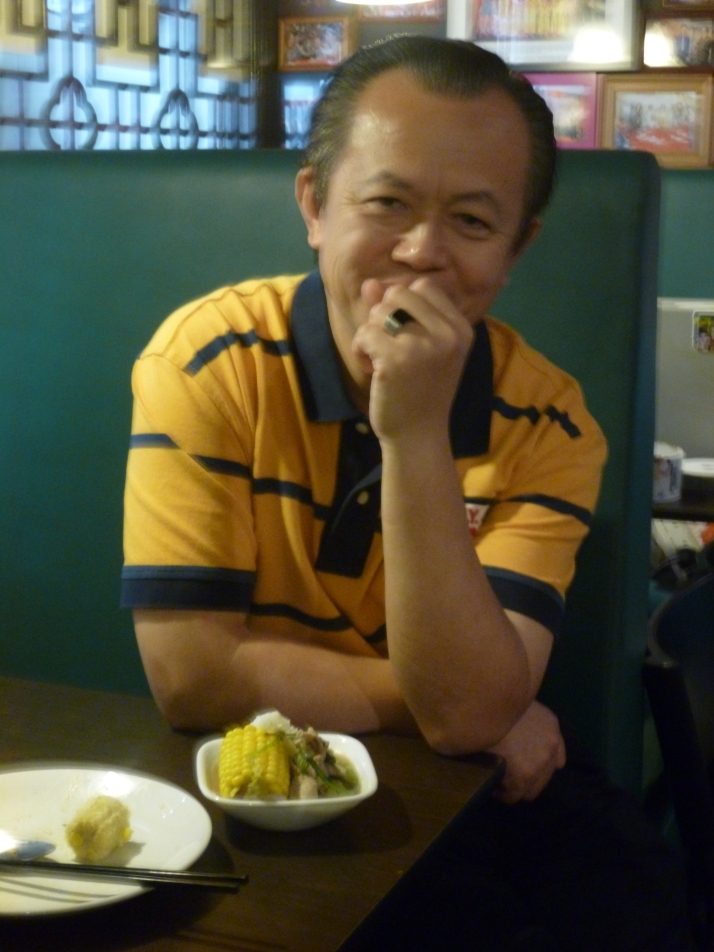 Please do not reproduce any content on this site without the author's permission. When linking to any images or posts on this site, please acknowledge the original authorship of such material.
Loading Comments...
Comment
×