The sight of a lion dancers’ van parked outside the outdoor car-park at the Ghim Moh Wholesale Market and Food Centre stopped me dead in my tracks. It was not just the anticipation of a free spectacle, but the sheer scale at which it would be conducted, that excited me. Eight massive red lions’ heads were lined up on the ground, and there were even more that were being paraded on the shoulders of performers into the market. Given the cost of hiring even a single lion dancer (two ‘lions’ can cost as much as SGD$500), and a subsequent procession of even more elaborate dragon figures, something grand was about to happen.

I followed the troupe to the small atrium that separated the hawker centre from the market. The open space had been completely remade for what appeared to be a festive occassion. A massive red-clothed altar took up half of the floor space, the cloth decorated with Chinese characters in gold thread. It didn’t appear to be struggling under the weight of the offerings piled on it: fruit girdled with red tape, pyramids of long noodles and arranged behind a bronze urn filled with peacock feathers and flanked with two large glass candle-holders. Behind it on more tables was a huge spread: bak chang (glutinous rice dumplings), red-dyed eggs, hunks of braised beancurd and more crowned by four entire roast suckling pigs. A massive crowd had gathered at the edges of the courtyard, with some reverently raising their palms together towards the altar or stepping forward to offer incense. And in the background were the methodical, reedy tones of a Teochew traditional puppet show, emanating from behind a large pink stage at the other end of the courtyard. A faint registering in my head that this was probably a commemoration of the market’s patron deity – Tu Di Gong – was overshadowed by an insatiable curiosity, and I dove into the crowd.

Celebrations among housing estates of the birthdays of various gods and goddesses in the Chinese folk religion pantheon is a fairly uncommon practice. It had been the flour peaches and noodles – traditional signs of longevity – on the altar that had clued me in to the fact that this was a birthday celebration for the local deity. There was an unusually festive air, with children gleefully climbing onto the bare wooden tables behind the altar while adults stood around in animated conversation. Even the non-Chinese workers at the market were moved up to the edge of the crowd, peering out to see what would happen. As I raised my phone to take pictures of the scene, I felt oddly self-conscious. I knew nothing about and could not be involved in what was going on. I was effectively a stranger in what could be said to be my community.

My thoughts were interrupted by the characteristic drumroll of a lion dance performance. The puppeteers paused. A pair of elders suddenly emerged from the crowd, ushering the other onlookers backward with sharp exclamations in Hokkien. Then the first group of lions burst onto the scene. I, and the rest of the crowd, had seen many a lion dance in our lifetime, but the tumbling and jumping and whirling of the colourful creatures was as enrapturing as ever. The drumrolls became lower and steadily softer as the lions hunkered down, preparing for cai qing (literally ‘plucking green’). The performer supporting the ‘tail’ of the lion would actually be busily peeling mandarin oranges on the ground at this stage of the performance whilst passing shredded lettuce leaves to the performer in front. Any aspect of a lion dance is supposed to be good luck, and so there were members of the crowd rushing forward to pick up the leaves that the lion appeared to have spat from its mouth.

One performance was, of course, not enough for this special occassion. Shortly after, the dragon dancers burst onto the scene. Three dragons in gold, white and black were brought out respectively at separate times. Each was supported at a different section of its body by nine performers with metal poles, making the dragon writhe and spin through the air in pursuit of a fiery pearl supported by a tenth performer. Each time a new performance started the puppeteers had to stop theirs, and I wondered if the deity in particular would have enjoyed such erratic changes in the entertainment schedule. And then it dawned on me that there was perhaps a separation of functions: the puppet performance was meant for show, and the lion and dragon dances were meant to usher in good luck.

And it seemed, the latter was also brought in to appeal to the human audience. This was made clear by the sudden appearance of a 3m-tall metal pole in the middle of the courtyard, with only a narrow bar near the top section. We watched, stunned, as a particularly agile lion dancer scaled the pole whilst supporting the heavy lion’s head, supporting himself on one leg at the top of the pole. Party poppers went off, a banner unfurled with a flourish. The crowd roared. And as suddenly as they started, the performances were over. The onlookers began to line up to partake of the lavish spread that stood behind the altar, and the lion dancers began to wheel away their drums and props and were out of sight.

There was not so much a religious aspect to this commemoration, I thought, as one of community. A deity’s birthday was also used as an oppurtunity to provide free food and entertainment and develop closer ties among the participants, who were mostly adherents of the syncretic Buddhist-Taoist Chinese folk religion. There were some questions I came away wanting to answer: what did each item on the altar mean, and how did each gain its significance? Could these ceremonies have a deeper socio-cultural function beyond what I hypothesised? But while I would never be able to connect to these practices spiritually, part of me is proud of the cultural colour they bring to my city. 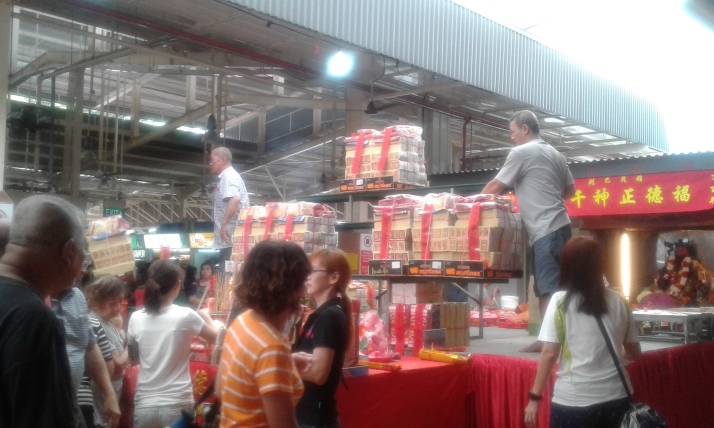 Two community elders stacking large bales of paper money behind the altar. Paper money and other paper replicas of material goods are often burned during Chinese folk religion ceremonies as it is believed they will serve as new possessions for the deceased in the afterlife. In the background is the market’s statue of Tu Di Gong garlanded with jasmine flowers for the occassion. 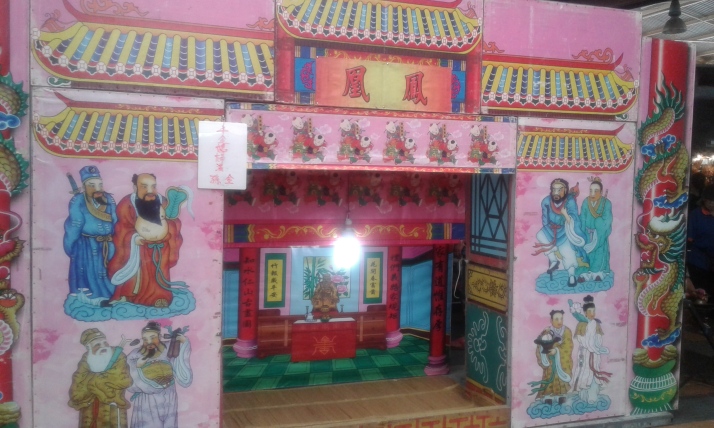 A traditional Chinese puppet stage, nowadays only performed at ancestral worship ceremonies. The figures depicted on each side of the performance area represent the Eight Immortals from Taoist mythology. The inside of the back of the stage is painted to resemble a Confucian domestic altar, while the piece of paper tacked above it bears the title of the play: ‘Thousand-Gold Wife and Ten-Thousand-Gold Grandchildren’.

The mannequin puppets gathered on-stage at the end of the performance.

A man on percussions backstage of the puppet theatre. There was also a woman who was singing the play’s dialogue directly behind the stage, and a man on a well-worn keyboard to the other side. 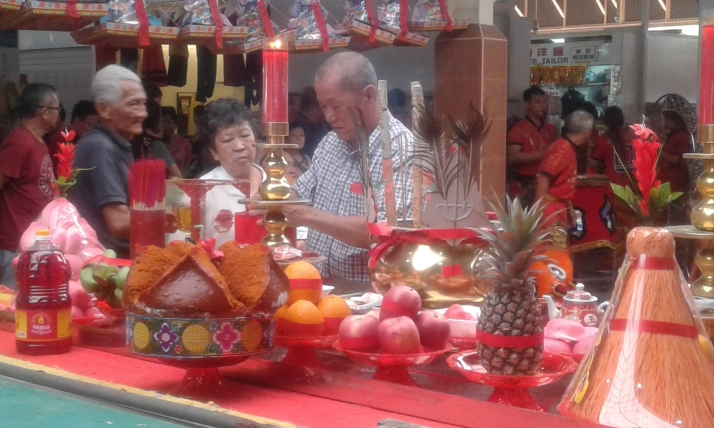 A close-up of the contents of the altar. Besides a cylinder of joss sticks, plates bearing various types of fruit and a pyramid of noodles, there is also a tea set and a massive bowl of thick flour cakes that are traditionally used as offerings. A lion dance troupe can be seen in the background to the right. 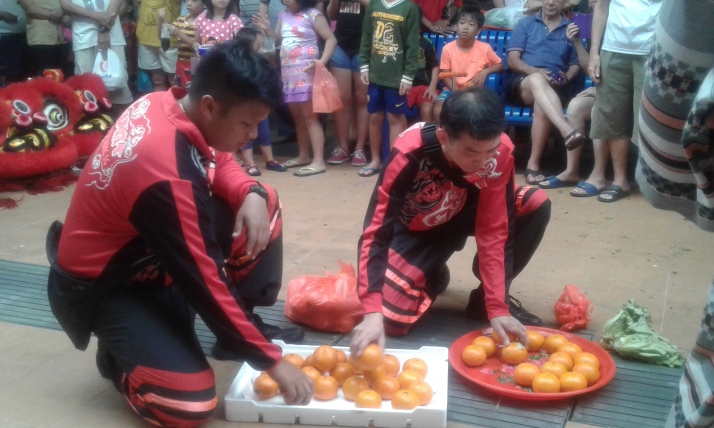 Troupe members preparing mandarin oranges to be used in the cai qing portion of the lion dance performances. 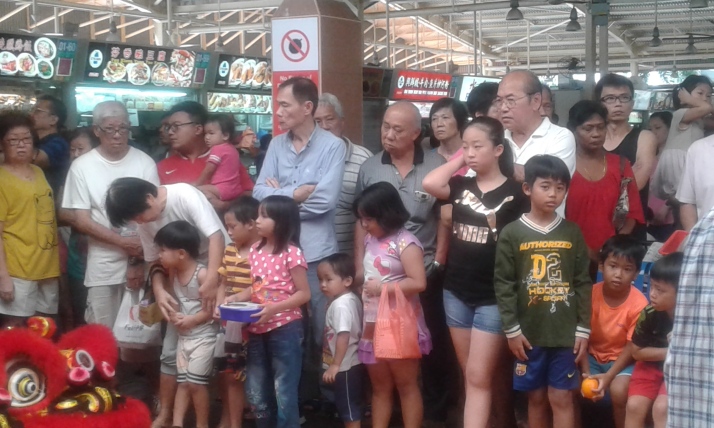 Part of the crowd of onlookers that had built up at the hawker centre. 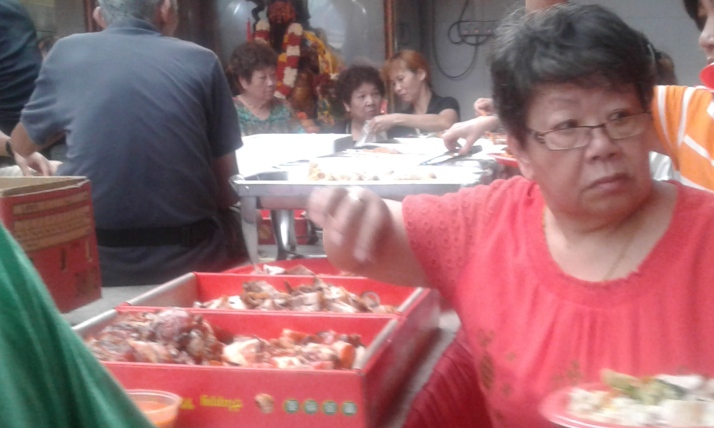 Devotees helping themselves to the buffet spread that had been prepared from the contents of the food offerings behind the altar.

A dragon dancer standing on top of a tall metal pole for an especially ambitious performance.

One thought on “At A Deity’s Birthday”