As long as there has been a contemporary art scene, artists have attempted to use their craft to make sense of their belonging to a community. The City Book is another of those attempts to take a fresh spin on the decades-long issue of Singaporeans negotiating their identity to the city-state. Published by the local art design studio Production Q, it compiled the works of six artists using their respective media to relate the stories and ways they view this urban island. I went with a friend, who shall be referred to as V, to their opening reception at Robertson Quay, hoping to find out more about how others have also tried to explore what their city means to them.

We edged past throngs of well-heeled socialites in business suits and cocktail dresses to find a browsing copy of the book. We were almost embarrassingly out of place: a pair of teenagers attending what appeared to be a swanky reception in an avant-garde retail-art-food market, complete with waiters bearing trays of champagne and truffle mushroom toast. V and I sat on a pair of beige rattan high stools, thumbing through the pages while looking out over the Singapore River gleaming under the night lights. A symbol of the island’s lifeblood, juxtaposed against an artistic dedication to the lives that have gone on around it, mostly oblivious to its presence.

One thing that stood out to me from the art I found in the book was an undercurrent of absence. A selection of what was covered: overlooked urban spaces, the disconnectedness of people in proximity to each other, the reclaiming of the urban by natural forces. I was particularly struck by Zhao Renhui’s photographs highlighting the artifice of nature in urban Singapore, as well as Charles Lim’s pondering Singaporeans’ lack of connection to the sea despite being surrounded by the ocean. I, too, felt discomfited by how many locals seemed to concentrate their yearning for the past on the recently bygone, oblivious to the natural and cultural losses that also go on around us. It seemed like the way these artists had chosen to frame their personal journeys was through looking back, through loss. It was something I found myself unconsciously relating to.

“It isn’t anything new,” V remarked. We had gone a quarter of the way into the book. “It’s just a different way of expressing what we already feel.” Several of the artists had stated they weren’t doing what they did for sentiment or nostalgia – a disclaimer, of sorts. And yet, in spite of the book’s main purpose as an expression of their views on the city, what they pointed out couldn’t help but sting a little. It stung because of what it, like its literary predecessors, had subtly highlighted: a chronic dissatisfaction of the present generation with the state of our city. Perhaps it is this dissatisfaction that also spurs me, to an extent; maybe it’s also what drives me to look towards and glorify the past.

V and I continued talking as we walked to the bus stop. We discussed Dawn Ng’s psychedelic compositions of typically mundane objects that could be found in households and provision stores. “I guess we’re privileged in that we’re able to distinguish the quotidian from an artistic standpoint,” he went on, “but I wonder if the people who actually use it would recognise it as the quotidian.”

And even if we recognise it as such – what then?

The search for, and celebration of, the quotidian is arguably another big driving force behind what I write about. It can easily be seen as a sort of quizzical, inane idealism. But I guess it is precisely the fact that I feel the everyday needs to be celebrated that points to a deeper, unspoken absence that many Singaporeans would feel – hence a common national attraction to nostalgia.

And yet, I hope that one day I’ll be able to find artists who don’t just mention the keen loss of the past, but also pride over the future. A piece of art that shows how we can celebrate our country holistically without mourning what we wanted to keep.

And I will be working towards that, too. 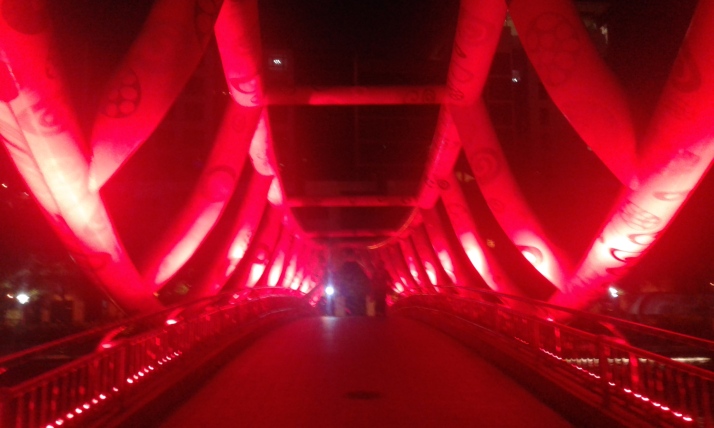 Please do not reproduce any content on this site without the author's permission. When linking to any images or posts on this site, please acknowledge the original authorship of such material.
Loading Comments...
%d bloggers like this: