Church elders putting down icons of Jesus on the cross in the Cathedral of the Good Shepherd as worshippers look on from outside the crowded church.

A friend’s Insta-story reminded me that March 30 this year was not only Good Friday, but also the beginning of the observance period for the Chinese tomb-sweeping festival known as Qingming (清明). The coincidence of two religious festivals, each revolving around different ways of honouring the deceased, struck me deeply. And so, I was drawn to discover how each of these groups would experience the same day in their distinct ways.

END_OF_DOCUMENT_TOKEN_TO_BE_REPLACED

“The reason why I like this so much is because it’s the same taste I used to have when I was a child,” my dad told me. “When I was a small boy and this man’s father was selling prawn mee in my neighbourhood.”

My parents and I were hunched over a pale wooden table, small wisps of steam rising into our faces from the two lime-green bowls of prawn noodles sitting in front of us. Unusually enough, we weren’t at a hawker centre. Right at the back of a nondescript shop lot sandwiched between a swathe of tarmac and a collection of bakeries and cafes sat a pair of food stalls, separated from the entrance by an expanse of identical tables and stools. It was testament to the amount of prestige Blanco Court Prawn Noodles had earned among Singapore’s makan kakis (‘foodies’ in popular slang) over the decades. Originating along Merchant Street, the stall became one of many in the eponymous shopping complex along North Bridge Road (several of its neighbours went on to become legendary food stalls in their own right), and its owner managed to earn enough to rent a small block along Beach Road which is only shared with a drinks stall and one selling ngoh hiang (Chinese five-spice meat rolls).

Prawn noodles are a common sight in Singaporean hawker centres. Many foodies attest that it’s the broth which makes or breaks them. The broth from Blanco Court Prawn Noodles appeared thin, but every mouthful seethed with a strong prawn flavour – the way it should be, my father asserted, from hours of cooking prawn shells down until every bit of flavour was unlocked. Some would say the prawns looked insipid, being unlike the full, bouncy variants some serve in other hawker stalls. Yet others could argue that the prawns were not the point of the dish. The other components were only subsidiary: the beansprouts that snapped between your teeth, the tender strings of wilted water spinach, the splash of fried onions on top for a burst of fragrance. It was just the broth that mattered.

My gold standard for prawn noodles was different.

It was often bundled in a plastic takeout bag, or in turquoise plastic bowls. The white vermicelli noodles are much thinner, and instead of simmering in a bowl of broth they were mixed in with blobs of spicy shrimp paste and dried bird’s eye chillis. The noodles wouldn’t come with the heads on (a pity, because I always enjoy sucking the juice out from them!) but made up for it with a few nuggets of pork lard, crispy and utterly toothsome. I would never eat the vegetables that came with it, but spend my Saturday mornings sitting amid the bustle at Ghim Moh Food Centre, or else slurping up my noodles on a lazy day at home in front of the television.

“Even the one at Ghim Moh is an innovation,” my father has remarked. “Then when they try to innovate it doesn’t taste the same. Blanco Court still has the real stuff.” But what if what you’d known as the ‘real stuff’, the stuff you’d grown up with, was what another person had regarded as a perversion of the flavours he’d known? And that’s something I’ll have to feel for with my tastebuds, in every spoonful of prawn broth.

A picture of the old auntie and her friend taken in December 2016.

The lane leading from the Buona Vista subway station to the nearby mall, as of late, is framed by eager touts or salesmen. Itinerant tissue-paper sellers – a euphemistic term to describe those who would narrowly become beggars – appear, set up shop, and often vanish without a trace.

END_OF_DOCUMENT_TOKEN_TO_BE_REPLACED

Floodwaters over a pavement along Jalan Ubi, right next to the Willing Hearts Soup Kitchen

Thankfully, I’d sought shelter long before the flash floods hit eastern Singapore on Monday morning. January had rolled around, and again I found myself at Willing Hearts. Maybe it was the announcement I’d heard over the radio that they had a shortage of volunteers on the weekdays, or the odd calm of being immersed in manual work. The kitchen was emptier than usual – the food preparation area seemed to be quiet, and the packing stations were filled mainly with the same kinds of people you’d expect to see on a January weekday morning. Retirees, university students on break, and younger students waiting for the release of ‘O’ or ‘A’ Level results.

Next to me scooping rice was a middle-aged Indonesian Chinese lady, one of the regular volunteer leaders whom everyone knew by face but not by name. (We just never felt the need to ask.) She had small twinkling eyes and a hearty voice, easily heard in cries of “Brother!” and “Sister!” to the other volunteers even at the busiest of times. My mother, who had come to help out with me a couple of times, always thought she was being too bossy and crass. I’d never talked to her. During a lull in the packing, I felt her lean over towards me.

“No lah Auntie, I’m in my second year of university already.”

She started, a big grin forming on her wide, round face. “Wah, university already ah!” Suddenly she pulled me in for a hug. “Auntie thought you still so young. You like chili padi! Small, but hot.”

This was nothing new for me – being small and slight for my age, I’ve often been mistaken for a thirteen- or fourteen-year-old. Nevertheless, hearing that I was in university brought to mind her own children, and she placed me in confidence in one of the unlikeliest places to hold a deep conversation. Below is an abridged version of what she told me.

“When I went to Johor in the car, I got lost. Then got one motorcycle pull up next to me, show me the way to the shopping mall. So Auntie said to herself, ‘Thank God!’ He sent me an angel. God is really good, ah. But we need to treat these old people well, because next time when old people must take care of us also. Like you put the veggie separately, then the meat won’t get soggy and become not nice to eat.”

“I have one daughter in NTU, studying Biochemistry. My third son now in NUS Law. My youngest, at first he fail Higher Chinese in secondary school, then he told me: “Mummy I don’t want to go JC anymore, I want to go poly (polytechnics).” I tell him, must still try, because go poly then very hard to go uni. Then later he said, “Mummy I want to go JC again. So he went to Victoria Junior College. Now he’s in army, next year will go university. And I felt very proud. His mummy not good at speaking, but then he can do good enough to go to the good school.”

“Now I’m an ah ma (southern Chinese dialect phrase for ‘grandmother’) already! Two grand-daughters, one nine years, the other three months. My three-months-old grand-daughter so cute! Both are from my 33-year-old son. Girl, your family is girl-boy-girl, right? Maybe you pampered at home because you’re the youngest. Mine is boy, girl, boy, boy. But my girl very independent. She plays rugby. Over the holidays she played in Scotland, then she fly to Hong Kong.”

“Auntie recently went for checkup, and the doctor said: ‘Your only problem is you are over-weight.’ That’s because I used to take hormones for birth control. Better to have a larger age gap between the kids. Otherwise you every two years, every three years, you have one, it’s not good.”

The afternoon culminated with her eagerly showing me a photograph of the aforementioned baby grand-daughter. It seemed odd that she should open up to me so quickly, but the conversation we had was a gesture that touched me. Once again, it had, beyond volunteerism’s tangible social benefits and the dressed-up allure of charitableness it could bestow, reminded me of its lively human face.

A group of the ‘older uncles’ listening to a commemorative speech by other members of Lam Fong Fut Hok amid cans of beer and plates of buffet spread.

The men and boys behind many a lion dance performance are not just performers. Years of travelling round the island as a troupe and practicing together has made them a fraternity. And the end of the old year was a good time to cement that status.

END_OF_DOCUMENT_TOKEN_TO_BE_REPLACED

And what would this gal be doing?

Casa Verde, an Italian restaurant at the Botanic Gardens, attracts just as many animal as human patrons. Dogs on their morning walk will look up from their tethers to hope for table scraps, mynahs stalk the edges of the tables for unattended plates, and from the edges of the adjacent forest lurk a third group – the ‘wild chickens’.

END_OF_DOCUMENT_TOKEN_TO_BE_REPLACED 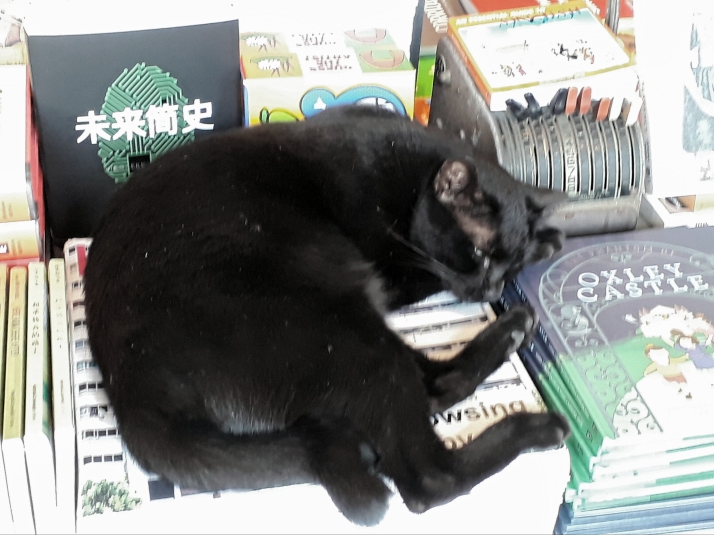 The latest addition to the Grassroots Reading Room.

Going to college was a significant change for me, and regrettably I let this blog lie fallow. Yet my new life experiences have exposed me to different audiences who would receive my original purpose – that of highlighting the lesser-seen and heard-of in this island city of mine.  END_OF_DOCUMENT_TOKEN_TO_BE_REPLACED

Afraid to take the next leap of faith?

Plaintive chirping has filled the air outside my bedroom window the past three days – unmistakable signs of a season of new beginnings and adventure, for a pair of yellow-vented bulbul fledglings are making their first forays out of the nest.

END_OF_DOCUMENT_TOKEN_TO_BE_REPLACED 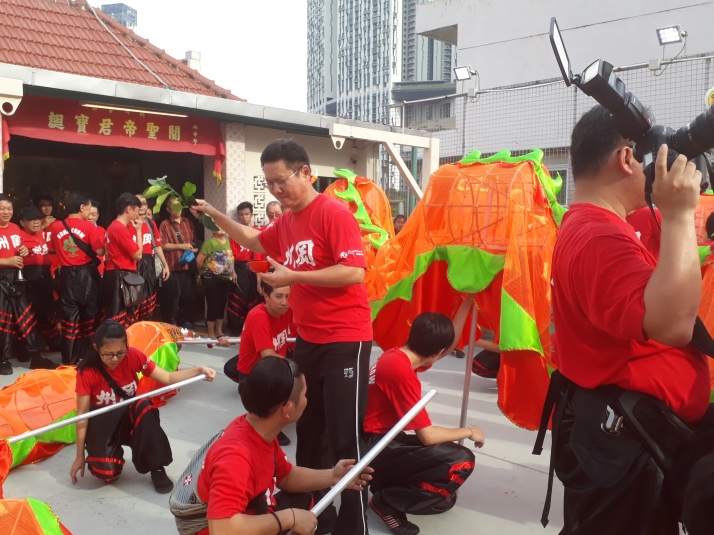 ‘Draco dormiens nunquam titillandus,’ says the Hogwarts school motto. In Chinese tradition, however, waking the dragon is an indispensable part of its creation.

END_OF_DOCUMENT_TOKEN_TO_BE_REPLACED

My classmates and I at a friend’s house for Hari Raya Puasa.

I have a junior college classmate who has invited her whole class down to her house to celebrate the end of the Muslim fasting month three years in a row. And every year I am amazed at the number of visitors that her family has thrown the doors wide open to – extended family from all walks of life, and ex-classmates and future schoolmates among others.

END_OF_DOCUMENT_TOKEN_TO_BE_REPLACED

Please do not reproduce any content on this site without the author's permission. When linking to any images or posts on this site, please acknowledge the original authorship of such material.